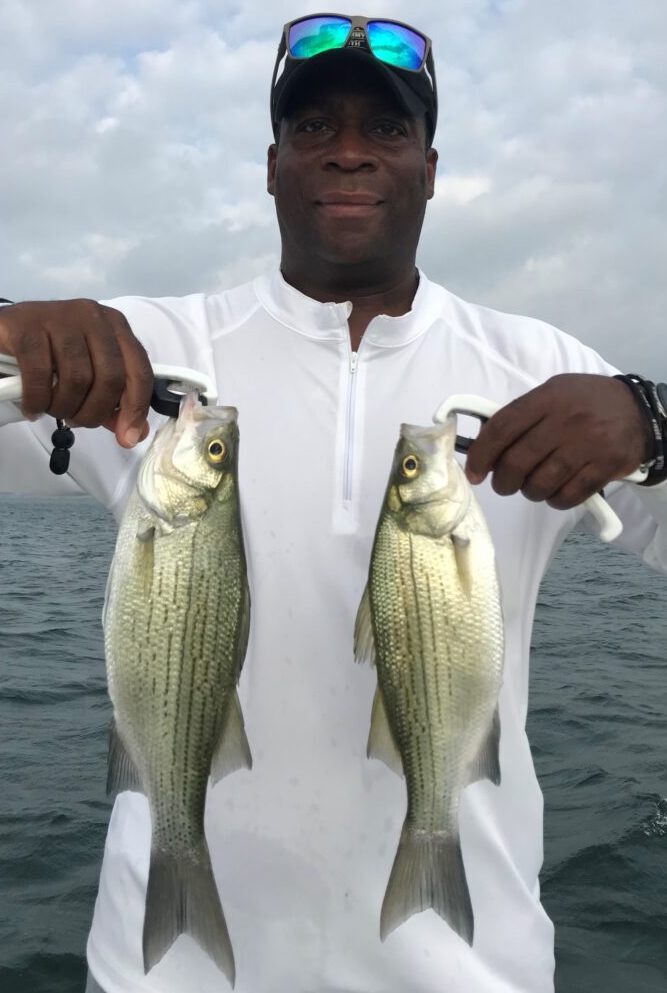 Today the weather “wrinkled” on us a bit versus the “cookie-cutter” weather we’ve enjoyed since the passage of last week’s hurricane-influenced weather.  The winds were up early and strong this morning, and we dealt with 100% grey cloud cover all morning, as well.

The fish were still generally in the same pattern, but the topwater feeding activity was much reduced today as the winds and cloud cover made the surface more difficult for gamefish to pin bait against. Generally, we downrigged from 6:50 until about 8:00, then found white bass heavily schooled both on bottom and suspended and worked MAL Lures through them until around 9:20.

We then moved to an area I’d not fished yet this summer and alternated between downrigging and using MAL Lures to close out the trip with exactly 70 white bass landed.

The use of Garmin LiveScope in downward mode absolutely helped put more fish in the boat as we were able to very precisely time the rise of our lures through horizontally moving schools of white bass.  We were also able to track the rise and fall of our lures 100% of the time, thus allowing us to continue retrieving when we saw we were getting followed, and, on the other hand, stop a retrieve short and allow it to return to bottom once we saw no fish expressed interest.

Wind Speed & Direction: S12 prior to sunrise, slowly increasing to SSW 15 by 9:15, then gusting higher thereafter.