EAST WALKER RIVER
The East is running about 78 cfs today and we’ve still been getting some very good reports from down there, not ALL of the reports have been good, but anglers who are putting in the effort are having some great days. The water temps haven’t gotten too high for the fish to be healthy at this point, hopefully that will last a while longer. The dry/dropper action has been good lately as well as the straight nymphing. We’ve had a couple good streamer reports as well but most anglers are going with the nymphs. Some patterns to try: chubby chernobyl, stimulator, hopper patterns, zebra midge, perdigon nymph, flashback emerger, wd-40, micro mayfly, sculpzilla, dead drift crayfish, E/C caddis, para adams, elk hair caddis.
SCEIRINE RANCH
The ranch is still fishing very well especially with dry/dropper rigs, not much on the streamers or straight hoppers lately but lots of nice 16 to 18 inch fish on caddis nymphs under chubby’s. Give us a call if you want some time on the water down there.
BRIDGEPORT RESERVOIR
Bridgeport had a couple good days mixed in with a few that were a bit slower. On the good days the trolling was good with Rapalas, crawlers and streamer flies, also there was some good bait fishing off of Rainbow Point with power bait, mice tails and inflated crawlers. It’s still been getting windy in the afternoons so that has slowed the action down some in the later half of the day. There’s still a few fish being caught from the shore but they’re fairly scarce right now. Seems best to get out early and get some time in before the wind picks up.
KIRMAN LAKE
We didn’t hear any news from Kirman yet, hopefully there are still some fish in there leftover from last year but it’s hard to tell. Last year the fishing up there was pretty tough with just a few successful reports coming in for the whole season. Hopefully the DFW will be able to get some fingerling fish in there this year and get the fishery back on track.
TWIN LAKES
The Twins are still kicking out a few fish, mostly early and late in the day with midday being a bit tough. We have had some slow reports from some anglers but there’s also been some anglers doing well with some good 2 to 4 lb rainbows. Haven’t heard of any browns lately. Kastmasters, Rapalas and Thomas bouyants have been good, as well as power bait, pinched crawlers and mice tails.
WEST WALKER RIVER
Like some of the other waters in the area we’ve had mixed reports from the West, some anglers doing well with panther martins and rooster tails, or eggs and crawlers for bait while other anglers are not having the same luck. There has been a few fly anglers doing well with hopper/dropper rigs up there, grasshopper on top and a prince or pheasant tail underneath. Water conditions are pretty good with the flows being just a little high but clear.
VIRGINIA LAKES
The Virginias have been a little hit and miss as well, we had a 4.5 pounder come in from Big Virginia yesterday and we’ve had some good reports from anglers catching a lot of native brookies but there are still reports from some anglers not doing that well. Good news coming up though the Virginia Lakes and BFEF have partnered on a load of fish for this Wednesday so that should liven up the action!
If you would like to receive this report via email, drop me a line at [email protected] and I'll get you on the list!
RANDOM INFORMATION:
In addition to the BFEF/Virginia Lakes Resort stocking this coming Wednesday, there will also be BFEF plants on Bridgeport Reservoir, Robinson Creek and Upper Twin Lake!

4.5 lber out of Little Virginia 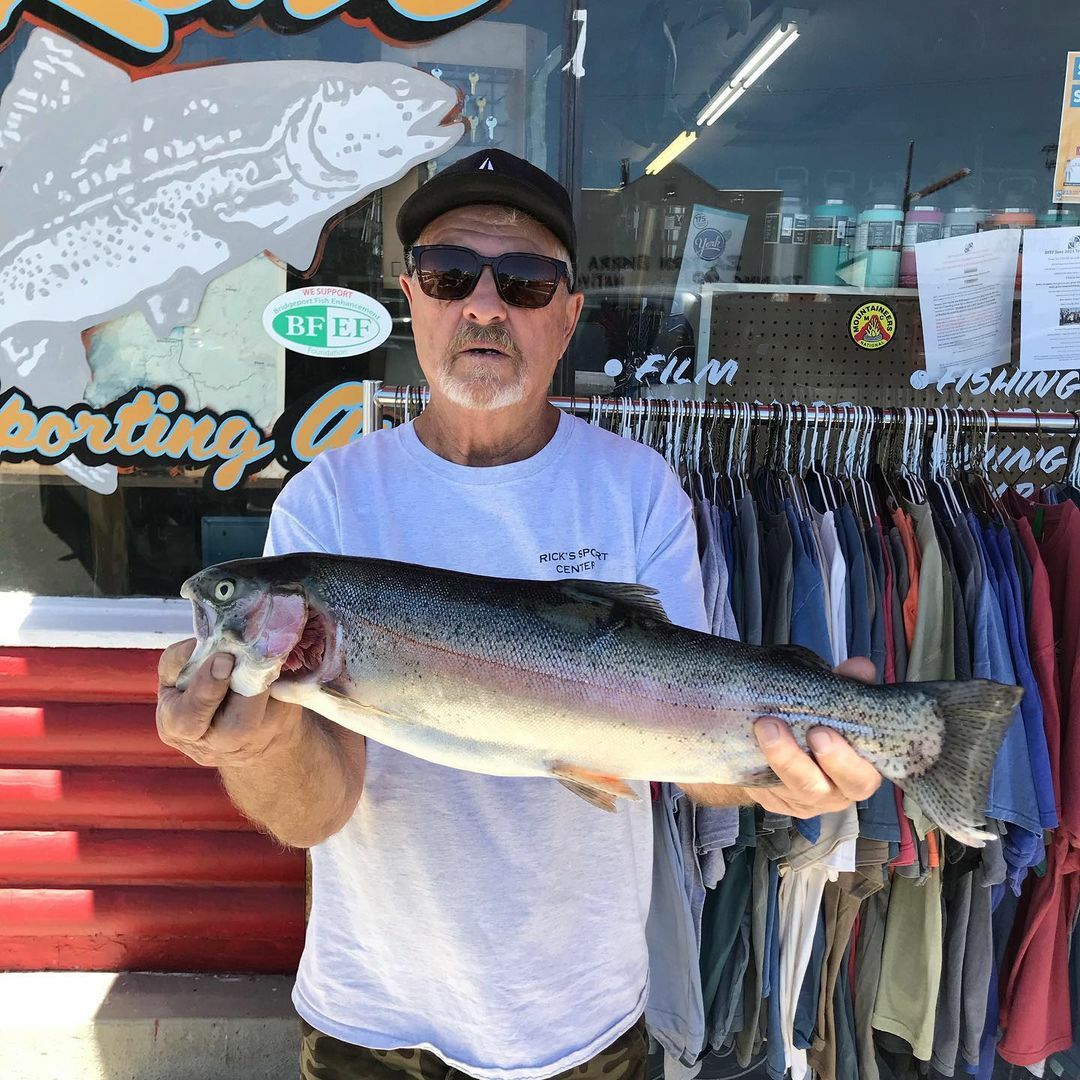